Price: $10 – $20 sliding scale Studio 303 is commissioning a collaboration between two artists: one working with visual media (sculpture, textile, wearable art), and one working in movement (mime, dance, physical theatre, performance art). The result? A reciprocal metamorphosis of both object and action. Through a call for submissions, two teams were selected for this project: one, a young duo from Montreal and New York who already know each other, and the other, a blind date between a Montreal-based visual artist and a contortionist from Quebec city. Both teams will benefit from a 2-week residency at Studio 303 prior to the show. Come and discover how the performers will literally give life to the visual artists’ imagination, who in turn, transform the movement. The performer literally gives life to the visual artist’s imagination, who in turn, transforms the former’s movement. The result is a reciprocal metamorphosis of both object and action, inspired by the work of Pyuupiru, a Japanese artist known for her outlandish interdisciplinary costume creations.

ARTISTS’ BIOGRAPHY Jasa Baka & Karianne Hayes: This is the very first creation project between the two artists who were introduced to each other specifically for this event. Jasa Baka holds a BFA from Concordia University’s Theatre Design program. Collaborations to create interdisciplinary and new media cross pollinations are an ongoing process. Smile Stealers, a film she wrote designed and produced has screened at NXNE, FNC and Festival Phénomena. Karianne Hayes studied at the Quebec Circus School. She mixes her past life as a book-worm and word-lover, with her present as a contortionist; this allows her to achieve a balance between poetry and acrobatics.

Rebecca Patek & Anna Jane McIntyre: Rebecca and Anna Jane have been discussing starting on this exact sort of collaborative performance project for the past two years. Both of them play with themes of popular culture, North American politics, race and gender, but they approach them with very different artistic vocabularies and foci. Rebecca Patek is a New York based choreographer and performance artist creating work that is a synthesis of dance, theater and comedy. Patek’s work has been presented at The Museum of Arts and Design (NY), Movement Research at Judson Church, Brooklyn Arts Exchange, among others. Anna Jane McIntyre is an interdisciplinary visual artist with a practice combining printmaking, sculpture, performance, costume and micro-activism. She has a BFA from the Ontario College of Art and Design of Toronto and an MFA from Concordia University. 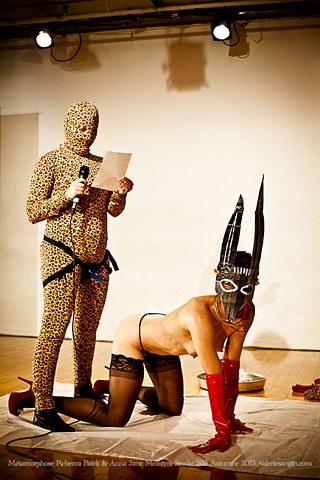