My family moved to the suburbs of Oakville, Ontario when I was six. It was a long, bumpy, rambling voyage to get there. We started in London, England and moved to New York City, then several small Saskatchewan farming towns, to the suburbs of Bramalea, then 138 Digby road Oakville Ontario L6J 6B8. We laid our roots. We planted trees and acquired a swingset. I was to stay living in the suburbs for my formative years before finally escaping at eighteen. 138 Digby road was in a brand new neighbourhood. The sidewalks were lined with skinny saplings not yet strong enough to stand on their own. Behind our backyard was a forest that had not yet been developed. This forest was a place of marvel and mystery for me. I loved it but was also afraid. When I was on the swings I kept my eyes on the woods. An owl lived in one of the trees. In one area of the forest there were remnants of a house that had once stood. We were strange in this suburb. We were immigrants with accents and strange foods, behaviours, enthusiasms, notions of tidiness and senses of humour. The children when they came to call on me expected me to be white. They told me as much. With my afro and refusal to wear pink or skirts and light moustache I was often taken to be a boy. My parents hosted many late night dinner parties. When I was small the suburbs were as exotic as a jungle to explore. I loved the three-trunked willow tree in our backyard and dreamed of building a treehouse within its branches. Beaties, the local corner store and forbidden territory, was as seedy and enticing as a back alley strip club with its dark musty interior and infinite glittering jars of penny candies. Once, after a disagreement with my father I spent hours raking leaves into the words 'Help me.' for the airplane traffic overhead. I often dreamed about our basement as a labyrinth. I soon noticed that North Americans were very Clean & tTidy. They didn't have things on their countertops like we did. We lived next door to 3 Bobbies and one Thelma. The neighbourhood children were rude to their parents in ways that terrified me to witness. Children ruled the streets. As I grew older I learnt that the suburbs were bland and terrible things. Sameness was bad, boring, stultifying, possibly dangerous, maybe even evil. In the suburbs, houses repeated themselves in different orientations and when you entered them you immediately knew where everything was, the bathroom, the coat closet etc.. You knew where the dreams and aspirations were hidden. There were no surprises. In contrast to our neighbours, 138 Digby road was very messy. We had things everywhere, falling and pushing for freedom out of closets and drawers, crowding countertops. When I knew people were coming over I was often in a panic to clean up before they came lest we be judged. Many years later I came to view suburbs as not-so-bad. On the outside the houses were bland and blank, but on the inside these homes were an oasis of dreams-come-true, of safety, a Utopia of sorts for each family. Each house on the inside was different. One house I went to housed a white family from South Africa. Their house had the feeling of a hot climate. Their furniture was hard and sparingly arranged. Their walls were painted with colourful and graphic designs. In 2009 I worked as a landscaper in Laval. Once again I was struck by the particular vibrations and atmosphere of newly developed neighbourhoods. Though there were many houses and too many cars for each driveway, the streets were eerily quiet and devoid of pedestrians. Perfectly green lawns were dotted with the same species of evenly spaced shrubberies. There were very few animal sounds. Often I thought of our team of paysagistes as a flock of caffeine infused cicadas. Because this is a short account of my suburban experiences I will end it here. La fn. 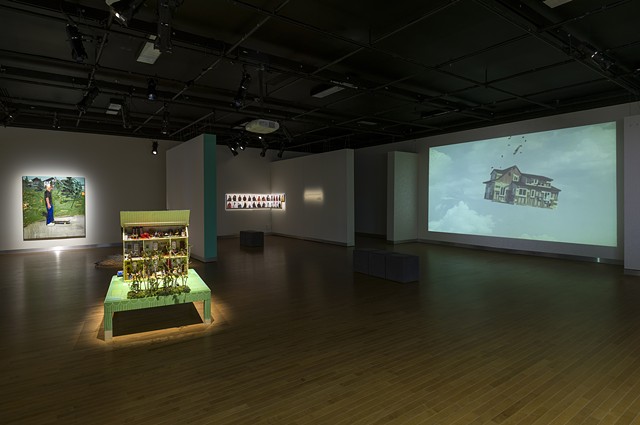 138 Digby road, the installation
< previous next >